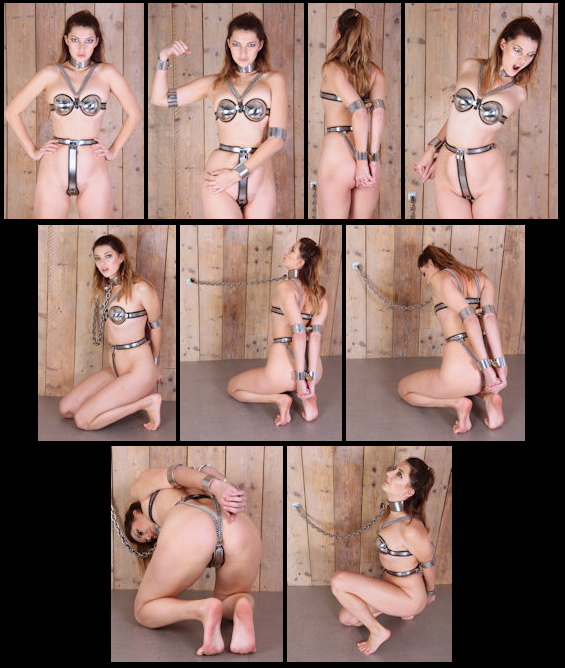 Russian Mistress Kristin has done terrible things to guys. She loves to lock them in tight bondage and chastity! But now it is time to test Mistress Kristin! She thought this would be easy, but we locked her in full chastity and chained her collar to the wall. She was then elbow and wrist cuffed, behind her back. And Mistress Kristin isn’t super flexible. So that was hard! She suffers beautifully for us, as she tries to deal with the uncomfortable position until we decide to unlock her. But since she is a Mistress, we leave her in bondage just a bit longer than most girls! That should teach her!

MetalBondage - Cindy Dollar - Elbow challenge (2022/HD/39.2 MB)
Cindy Dollar is back! She is so much fun, her reaction to being locked in a tight chastity belt again was very silly and relaxed! She also loved the tight
MetalBondage - Introducing Helena (2022/FullHD/421 MB)
We just needed to shoot some metal bondage with new girl Helena! She was locked in this chastity belt for an afternoon (check out her ChastityBabes Casting),
MetalBondage - Mistress Kristin - Her toes (2022/FullHD/472 MB)
Mistress Kristin is back! She never did any submissive shoots anywhere, but we make her do things she has never done before. This time, we challenge her to
MetalBondage - Diamondly - Extreme elbow bondage (2022/FullHD/506 MB)
Diamondly is an upcoming 19-year old bondage model who loves extremely tight bondage. She is young, but has already has a lot of experience. Today however, she
ShockChallange - Mistress Kristin - gets shocked (2020/FullHD/827 MB)
She is a Mistress. Kristin loves to whip and hurt people for her own pleasure. But can she take the shock challenge? She is quite tough, but by raising the